Abilio was inducted in 2001. He was the first Brazilian and the first South American to swim the English Channel. Abilio swam from France to England and, with only 14 days rest, swam the other way from England to France in 12 hours and 49 minutes to set a world record in 1959.

He was instrumental in the establishment of the first Brazil National Open Water Championships and many other events including the 25K (15.5-mile) Ilhhabella-Caraguatauba swim. He swam the English Channel three times including his 1959 England-to-France record. He unofficially crossed the Catalina Channel in 1968 as well as the Strait of Gibraltar in 1965, participated in the professional 98K (60-mile) Lake Michigan race from Chicago to Saint Joseph in 1965, the Asswan, Egypt race in 1969, the Suez Canal race in Egypt in 1971, the Mar del Plata race in Argentina in 1960 and Lake Ontario in 1960. One of his last races was the 50-mile Marathon of the Nile race in 1975 where he competed as a 51-year-old against the top professional marathon swimmers. He placed third in 10 hours 46 minutes and 19 seconds, just behind winner Johan Schans of Holland (10:46) and Abdul Latif Abou Heif of Egypt (10:46:17). 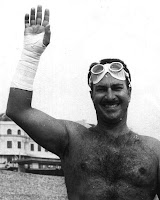 In 1958, he finished 2nd in the 60K Maraton Over Sur Oise race, fourth in the 50K Rari de Nantes race, second in the 15K Brighton Pier-to-Pier race, won the 10K Lake Windermere race, won the 10K Dover-to-Deal race and successfully swum across the English Channel in 12 hours and 45 minutes.

In 1959, he swam 60K (37.2 miles) from Prova de Tiunfo to Porto Alegre in Brazil in 16 hours and 1 minute, finished second in the 25K (15.5-mile) ILhabella to Caraguatatuba race in Brazil, finished first in the Baía de Maldonado race in Argentina and won the English Channel race from France-to-England in 11 hours and 33 minutes.

Abilio later followed his victory two weeks later with a record-breaking 12 hour and 49 minute swim from England to France.

In 1961, he won the 40K (25-mile) world championship in Alexandria, Egypt, won the Venere race in Italy, the 15K (9.3-mile) Lake Como in Italy and finished second in the Wadenzee race in the Netherlands.

In 1968, he finished fourth in the Marathon International de Nage "Terre des Hommes" in Lac des Cygnes in Canada and swam 16K (10 miles) in the Salton Sea in California, USA in 4 hours and 25 minutes, 25K (15 miles) from Huntington Beach to Long Beach in California in 6 hours and 17 minutes, 25K (15 miles) across Owen Sound in Canada in 6 hours and 46 minutes and crossed the Catalina Channel from the California mainland to Catalina Island in 11 hours and 7 minutes.

In 1969, he finished third in a 22K (14-mile) race in Quebec, Canada, second in the 16K Hamilton race, won the 34K (21-mile) Traversée internationale du Lac St-Jean professional race in Roberval, Canada, won the 43K (27-mile) Portsmouth to Newport, Rhode Island race in the USA, won the Saguenay River race and finished second in the 21K (13-mile) Ultrech race in the Netherlands.

In 1975, he finished a close third in the professional world championship in the 92.5K (50-mile) Nile River race in Egypt.

Over his incredible career, it is estimated that Abilio swam more than 42,334K (26,305 miles) - or more than once around the world (whose circumference around the equator is 40,075K).