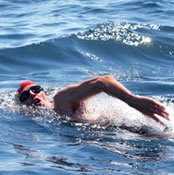 On September 4th - 5th, Santa Barbara Channel Swim 6x6 Relay will be held. US$1,000 will be awarded to the winning team in the challenging 6-person 26-mile relay from Santa Cruz Island to the California mainland (East Beach in Santa Barbara). Water temperature is expected to be around 70ºF (21ºC), although the tides, currents and winds can be strong.

On September 12th - 13th, Santa Barbara Channel Relay Swim will be held. Known as THE BIG SWIM, it benefits the National Marine Sanctuary Foundation in support of ocean conservation at the Channel Islands and Heal the Ocean. THE BIG SWIM was beautifully filmed by Michael Hanrahan of The Ocean Channel in a special documentary and is open to anyone comfortable swimming in the open ocean.

On September 21st, solo swimmers can participate in the Pier to Pier 10-mile Race will be held. Sanctioned by the Southern Pacific Masters Association, swimmers can compete in the no-wetsuit or wetsuit divisions. The race is from the Goleta Beach Pier to Stearns Wharf and runs parallel to the beautiful Santa Barbara shoreline.

Water temperature in the Channel can be monitored in real-time here.

In addition to the races, Emilio Casanueva recently reported on the latest solo swim where 15-year-old Nick Caine of Atherton, California broke the 10.8 nautical mile Anacapa-to-Oxnard crossing record by completely the swim in 5 hours and 3 minutes.

Ned Denison who has done the English Channel and unprecedented swims in Ireland commented on his 20-mile solo swim from Santa Cruz Island to the California mainland, "My wife and I were absolutely taken in by the city and hosted in fine fashion. On the day, the sun was fantastic and the playful seals and majestic manta rays were the best aquatic life I have even seen on a swim. I was 15 pounds heavier before my English Channel swim - so the colder water in Santa Barbara made this the tougher of the two swims."