British Tearing Up the Pool and Open Water 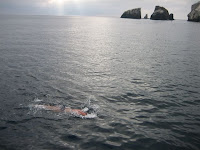 Just like his British pool counterparts in Beijing, Paul Lewis of London is making headlines in the water. Paul completed the first authenticated double crossing of the Santa Barbara Channel for a man. Paul swam from Silverstrand Beach in Oxnard (on the California mainland) to Anacapa Island and back in 12 hours and 54 minutes. Paul waited for one week for the optimal conditions.

In 1978, Cindy Cleveland became the first person to swim a double crossing from the California mainland to Anacapa Island and back.

steve-o... I am unfamiliar with most 10K courses... is the fact that the olympic 10k will be 4 laps about a 2.5k rectangle subject for concern for some participants and a competitive advantage for others? who are the meanest, nastiest swimmers among the males and females, and who are most adept at buoy turns? they'll round some fifteen buoys in the course of the swim won't they? considerable different strategy than a point-to-point swim... should be very entertaining and make for some drama... again - outstanding job on the blog! cheers

They start will be only 100 meters from the first turn, so they will be making SIXTEEN turns. In the pool, the "fifth stroke" (i.e., underwater streamlining off the walls) is very important, but the turns in the 10K will be much more important as you say.

In general, the Western Europeans, including the Russians, are the best at rounding the buoy turns. They are, by far, the most experienced in this open water Fifth Stroke. That being said, Mark Warkentin and Chloe Sutton are getting better and better, the more world-class races they compete in.