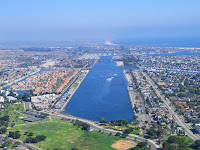 The 2008 FINA Bureau Meeting told place in Beijing during the Olympics. Various decisions were made including the approval of 2 new National Federations: Afghanistan and British Virgin Islands. The total number of FINA Federations is now 197.

This calendar includes two new World Cup events in the U.S. One in Long Beach, California and one in Manhattan, New York.

do you know the dates and places for the WC and GP races?

The dates and locations of the FINA World Cup and FINA Grand Prix races are listed in the July 29th 2008 blog under PRO OPEN WATER SWIMS (http://www.10kswimmer.com/2008/07/pro-open-water-swims.html)

I know that site. But are this the official dates? These dates were released before the meeting in bejing. So if these dates are ok, then thank you very much.
are all the races in the official calendar?

Yes, these are the dates that were on the approved calendar. That being said, there are occasional changes to the calendar dependent upon local situations. If there are any changes, I will post the new dates.

Thank you very much. You do an awesome job here