The Fifth Stroke in Open Water

Michael Phelps is the master of the Fifth Stroke. The Fifth Stroke is most visibly and efficiently utilized by swim stars such as Michael Phelps, Ryan Lochte and Natalie Coughlin. These swimmers use a powerfully efficient undulating underwater butterfly kick to blast off the wall.

"It's a weapon," echoed Jonty Skinner, the former world record holder in the 100 freestyle who is responsible for technical services for the US Olympic and national swim teams.

In a similar way, open water swimming also has a "Fifth Stroke", especially when one considers the 4-loop rectagular course of the Olympic 10K Marathon Swim that will have a total of 16 buoy turns.

And these buoys are large. Some open water swimmers like them - and others do not.

"You are all swimming in a pack and you don't have a lane to yourself so it is a very physical sport and you do swim on top of each other and get the odd fist in the face and that sort of thing," said Britain's David Davies, one of the medal favorites.

But, just as Michael Phelps separates himself from his competition at the turns in the pool, the best in the open water also use the turn buoys to their significant advantage.

The strategy for great turns in world-class open water races happens long BEFORE the turns, when the best swimmers start to position themselves for the best line or inside line. They speed up or change positions up to 200 meters before they hit the buoys.

Other experienced swimmers use a twisting move where they combine freestyle and backstroke strokes to quickly "corkscrew" themselves around the buoys,

Swimmers can easily get squeezed and lose valuable time at the buoys. In this photo, Grant Hackett (in the green cap) positioned himself well and captured the inside line while Spyridon Gianniotis (in the blue and white cap) is out of position, forced to take a much wider turn.

In the Olympic 10K Marathon Swim course in Beijing, there will be 16 turns. The turns offer a great opportunity to separate from one's competitors - or get left out of position and lose valuable time and distance. The medalists will be among those with the best Fifth Stroke.Top photo by Olympic 10K Marathon Swim of Getty Images by Michael Phelps in the 200-meter butterfly semifinal at the 2004 Olympic Games.

Bottom photo of the 5K start at the 2003 World Swimming Championships was taken by Dr. Jim Miller. 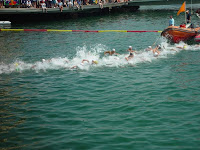 Footnote: Back at the 2003 World Swimming Championships in the men's 5K race when the open water swims started in the water, some swimmers were also using an undulating butterfly kick to start. Notice swimmers in the middle of the pack off the start.
Posted by Steven Munatones