A Wonderful Life, A Great Man 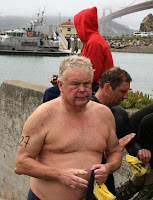 59-year-old Richard Harley of San Rafael, California, suffered a heart attack about three minutes into the Brooklyn Bridge Swim in New York City. Richard, a salesman, father and volunteer high school announcer for basketball and football, was swimming across the East River from Manhattan Island to Brooklyn to raise money for the Daraja Academy in Kenya where his son Andy works. The word daraja means bridge in Swahili.

Richard was swimming the length of the Brooklyn Bridge to bring attention to the girls boarding school.

According to his local local newspaper, the Marin Independent Journal, his wife Evelyn said, "He died with his bathing suit on. We were thinking about it, 'You lucky guy.'"

Richard died despite a desperate attempt to save him. "Everything happened within a minute or two," said race director Morty Berger. "The swimmer and the boater who provided assistance were great."

Melody Baglione, the competitor who noticed Richard floating unconscious in the East River, pulled Richard up to the boardwalk with a kayaker where Melody performed CPR. Emergency responders worked on Harley for 30 minutes before taking him to a hospital where he was declared dead.

Richard's son Eric reflected on his father's life, "You think about your parents and how they gave you life. "To go out like that - the lesson is to do what you love to do."

Richard was remembered fondly by those who knew him.

Steve Farbstein, the athletic director of the school where Richard volunteered as an announced, recalled, "He was a huge contributor to the high school and the community. This is a tremendous loss. He was one of the most loyal fans we had. I can only imagine what the family is going through. Our prayers are with them."

Neighbor Sandy Boyd said, "Rich was a sweet, nice, giving, caring man. He always wanted to know what our kids were doing. He was supportive and helped wherever he could. He was a real sweetheart and he will be missed."

Photo provided by the Harley family to the Marin Independent Journal.

Love you dad. You were a great man who inspired us all.

so sad. inspiring inspiring man. as another swimmer in the race, so sad to hear. so proud too that he lived his life to do such an inspiring thing as swim. my heart is with your family.