Olympians Heading To The Midmar Mile 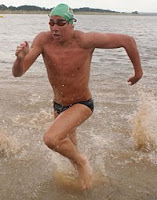 Similar to last year when 13 Olympians competed in the world's largest open water race, the Midmar Mile, Olympic medalists are starting to announce their participation in the South Africa classic.

The British team will face a tough German team of Nadine Pastor Reichert, Christian Reichert and Alexander Studzinski, who will all be knocking heads with the 2009 champion Riaan Schoeman and 2009 world championship 5K bronze medalist Chad Ho.