Polar Plunge In Support Of The Special Olympics 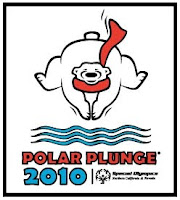 In July 2011 in Greece, there will be a world's first: the Special Olympics World Summer Games in Athens will hold its first open water swimming competition.

The world championship for Special Olympians will be a 1.5K race in the Aegean Sea in the city of Marathon where over 7,500 athletes are expected to take part in the World Summer Games where the athletes will use the same facilities as were used in the 2004 Athens Olympics.

In support of these programs, Special Olympics organizations around the world (in 186 countries) hold fund-raising events. As an example, a series of Polar Bear Swims are being held in northern California.

Prove you have acclimated to the cold water in your support of the Special Olympics.