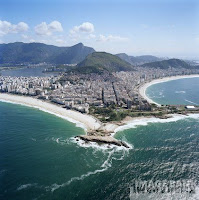 We had the opportunity to see first-hand - and swim along - the Olympic 10K Marathon Swim course that will be used at the 2016 Rio Olympics.

For five days, we encountered several different conditions, from flat conditions and mild rain to strong currents, heavy rain and rough seas with up to 6-8 foot surf breaking on the shore.

In summary, we were very impressed with the venue and proposed 10K course for a variety of reasons:.

1. First and foremost, the course will present a variety of challenges for the Olympic athletes. Due to the shape of the venue and the outline of the shoreline, the course offers a clever combination of a protected shoreline near the start and finish as well as exposing the athletes to potentially rough conditions of the Atlantic Ocean. Once the athletes swim approximately 200-300 meters from the protected start, they will swim into the open ocean where they will encounter swells and currents. On a rough day, these swells can be very large (of the rolling sort) and the currents can be very challenging, requiring successful athletes to have a very high navigational IQ.

On a windy day, the whitecaps and surface chop will most certainly be difficult to manage - which is what we expect the world's best marathon swimmers to be able to overcome. Even on a mild day, the normal ocean currents will have to be carefully managed because the currents will most likely not be running parallel to the athletes' most direct point-to-point course. To make things even more interesting, the ocean swells will be running at anywhere from a 45° to 90° angle to the athletes' most direct point-to-point course between turn buoys. This means that the athletes will have to take into acccount the dynamics of the ocean - which will be a great natural challenge for the world's best open water swimmers.

2. The setting is wonderful and the famous Copacabana Beach will be filled with hundreds of thousands of cheering Brazilian fans and Olympic spectators. The marathon swimmers will be treated like rock stars in front of a huge number of cheering fans, television cameras and the world's media - which is what they deserve after years of training hard and sacrificing nearly everything for Olympic glory.

3. The start and finish are in an area protected by the peninsula between Ipanema Beach (left in the above photo) and Copacabana Beach (right in the above photo). At the start, the athletes will swim straight out from the shoreline, gradually encountering rougher water with more dynamic forces (i.e., swells and currents) to deal with. It is also a great choice for the finish, which will undoubtedly be extremely close. The finish pad will most likely be stable in the calm, protected waters for a fair finish - except, of course, in the case where the ocean really becomes turbulent and the waves are pounding the shoreline.

4. The stretch between the final buoy and the finish pad will run parallel to the shoreline in full view of the onshore cameras and screaming fans.

It should be a great experience for the athletes and provide wonderful drama against a fantastic backdrop for the television cameras and worldwide audience.

5. The magically happy atmosphere of the venue. Combining the white sand and the green mountains as background, the pulsating music and multi-lingual announcements to hundreds of thousands of fans will be a giant, multi-cultural beach party where the marathon swimmers will be celebrated in Olympic fashion. Because Copacabana Beach has a tradition of hosting millions of revelers during celebrations, the Brazilians will be able to present the sport of open water swimming in a unique, enjoyable, media-friendly manner. Note: on New Year's Eve in 1994, Rod Stewart reportedly played in front of 3.5 million people on Copacabana Beach.

Aerial views of the course and great video shots of world-class marathon swimmers competing on the Olympic course can be seen here at Globo TV's spectacular television coverage. Using seven cameras - including helicopter aerial and in-the-water footage - of the King of the Sea Challenge (Rei Do Mar Desafio) is spectacular.

All systems are go for a truly wonderful, visually dynamic and challenging 10K race at the 2016 Rio Olympics.

For an overview of the 2016 Rio Olympics, click here.