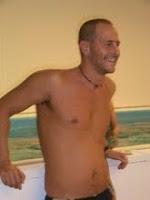 Gadi Katz, a media consultant and head coach of Total Immersion Israel, has developed a great marathon swimming concept that has caught the attention of numerous endurance enthusiasts.

His three-day race series is called Three Days in Three Seas or Shlosha Yamim BeShlosha Yamim in Hebrew (where the words 'Days' and 'Seas' are pronounced and written the same).

Race #1 is in the Sea of Galilee where the field will swim from Tiberius towards Ein Gev (see map on left).

Race #2 will be in the Mediterranean along the shores of Tel Aviv. Race #3 will be held in the Red Sea, from the border between Israel and Jordan to the border of Israel and Egypt (see map below).

The expected water temperatures are definitely on the warm side with the Sea of Galilee at 29˚C (84˚F), the Mediterranean at 29˚C and the Red Sea at 24˚C (75˚F. 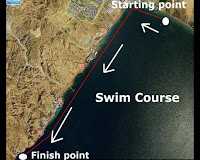 Due to the outpouring of interest after posting to his Zen in the Art of Swimming blog, Gadi had to coordinate the logistics for an even larger field than he anticipated.

In an interesting twist, three swimmers plan to follow up their Three Days in Three Seas open water swimming challenge with a running marathon in Jordan the day after.

The 3-day challenge welcomes any swimmer who can maintain a pace of 18 minutes per 1K, but Gadi expects many others to join in and swim in parts of the event on September 23rd in the Sea of Galilee, the 24th in the Mediterranean Sea and on the 25th in the Red Sea.

To get an idea of what it is like to swim in the Red Sea, Gadi prepared this video and slide presentation on another 10K swim along the same course in January: