Tokyo Prepares Its Olympic Bid With An Open Water Swim 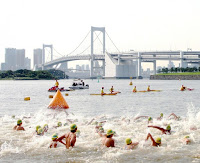 We previously wrote about the Olympic 10K Marathon Swim venue sites at the candidate city for the 2016 Olympics.

The 1.5 km open water swim was held in Odaiba Marine Park near the heart of Tokyo where the proposed Olympic open water swimming and triathlon events will be held if Tokyo wins the bid.

In a translated statement, Shibata said, "I’m thrilled to join fellow Olympians and all of the motivated people participating in today’s swimming marathon. Odaiba’s beach is a stunning backdrop for the event and together with Tokyo’s passionate sport fans, we look forward to cheering on the elite athletes who will compete here if Tokyo is selected."

Suzuki said, "I am delighted to see hundreds of passionate sports enthusiasts watching and taking part in swimming at Odaiba. I believe that Tokyo 2016 can provide an incredible stage for memorable performances, and am greatly excited by the prospect of seeing world-class athletes competing here in the 2016 Games."