Come-back At The Coastal Crawl 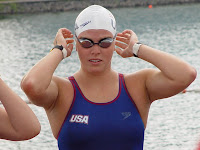 1998 world open water swimming champion Erica Rose (shown on left) experienced the highs and lows of marathon swimming this year, but ended up her season on a high note at the Coastal Crawl 10K Open Water Swim.

So Erica threw herself back into her work with little time for training as she had done for the past 15 years when represented the USA in numerous world championships and professional marathon swims. But the tug of open water swimming was too great to keep Erica away for too long.

Coastal Crawl 10K Open Water Swim, which doubled as the US Masters Swimming 10K National Championship, was enough to light her fire again.

The 10K race (see 10K swimmers and kayakers above), along with a 1-mile and 2-mile race, was held in Little Traverse Bay in Harbor Springs, Michigan this weekend.

"[The race] was extremely well run and there was a good turnout. The swimmers were a bit nervous about the water temperature heading into the event, but I think most people were pleasantly surprised with how warm it was. It was 67˚F for most of the course."

"The course was set up in three loops and was very clearly marked and well laid out. There were pretty easy points to sight and the water was calm while we were in the harbor. It got pretty choppy, though, once we went out into the lake, but we were only there for a few minutes during each loop."

Despite her recent inactivity, Erica was pleased with her performance, finishing as the first overall women in 2:22:44, second overall to D. Scott Wells.

"I felt great until that 6K mark, but then it became very clear to me why I used to train so much for long open water events. When I finished the race on Saturday, my arms hurt as much as they used to after a 25K."

"I swam most of the race with [Scott]. He did a great job of drafting the first loop, leading me the second loop and then taking off on the third loop. He had a very impressive swim and it was fun for me to get to be with him during two-thirds of the race."

"All in all, it was a good day and a great event that I would recommend to anyone."

thanks steven - i take back all those awful things i said about you. cheers

Since we are all in this open water community together, let's try to support one another. Practically speaking, this means if there is a swim that you wish us to cover, then please make the request before the swim, so we can get interviews and photos. We have now cataloged over 1,800 swims around the world and nealy 600 in the US, so we have time constraints as to which races, athletes, trends, scientific findings, rules, equipment and series we can reasonably cover.