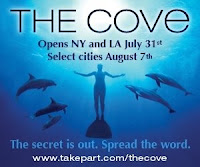 Ocean swimmers know that dolphins are among their best friends in the open water. Certainly it is better to swim with dolphins vs. the other marine life with fins.

An award-winning documentary, The Cove, opened this weekend in Los Angeles to positive reviews including Elle Magazine which called it "this summer’s most suspenseful thriller."

The Cove follows a team of activists and filmmakers as they infiltrate a heavily-guarded cove in Taiji, Japan. In this remote village, they witness and document more than 20,000 dolphins and porpoises are being slaughtered each year while their meat is sold as food in Japan.

Participant Media is launching a social action campaign to help support the filmmaker's efforts and promote their message - both inside and outside of Japan.

The Cove won numerous awards including the 2009 Sundance Film Festival, Silver Docs and Hot Docs. The film follows an 'Oceans Eleven' style team of underwater sound and camera experts, special-effects artists, marine explorers, adrenaline junkies and world-class free divers who carry out an undercover operation to photograph an off-limits cove located in Japan. The team is on a mission to discover the truth about the international dolphin capture trade. Utilizing state-of-the-art techniques, including hidden microphones and cameras in fake rocks, the team uncovers how a small seaside village serves as a horrifying microcosm of massive ecological crimes. The result of this team’s journey to Japan is a provocative mix of investigative journalism, eco-adventure and arresting imagery that adds up to an urgent plea for hope.
Posted by Steven Munatones