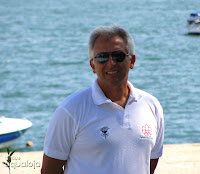 • Dr. Jim Miller is a member of the Sports Medicine Committee.
• Pierre Lafontaine of Canada is a member of the Coaches Commission while Paulo Frischknecht of Portugal is its FINA Bureau Liaison.
• Petar Stoychev of Bulgaria is on the Athletes Committee along with a host of other Olympic pool swimming heroes.

Photo of Paulo Frischknecht by Aqualoja.
Posted by Steven Munatones