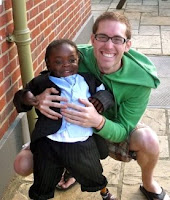 Kyle Taylor is an example of how failure and success can converge in the world of open water swimming.

The precocious 23-year-old Kyle was quoted by the New York Times in his run-up to an English Channel attempt, "Our generation is replacing signs and protests with individual actions. This is our civil rights movement and what will define our generation."

During his studies at the London School of Economics, Kyle as a Rotary Scholar, Kyle acted. He met Harvey Parry, a young boy who lost his legs to meningitis. "Harry has a huge personality. He’s like the typical 4-year-old boy who wants to run all the time. It doesn’t seem like an impediment to the way he lives his life. He loves to do everything by himself."

When Kyle learned that Harry's prosthetic legs needed replacement due to his growth, he started to think what he could do given his academic responsibilities...and started organizing an English Channel attempt to raise money for Harvey. Although he never started an actual Channel swim, he did swim for several hours in the Dover Harbor instead and reported that he has now generated over US$10,000 to pay for the expensive titanium prosthetic legs for Harvey.

"[This] experience worked out the way I wanted it to and had my life fundamentally changed by the entire journey," summarized Kyle.

As American writer Maya Angelou once said, "If you find it in your heart to care for somebody else, you will have succeeded."