Swimming Around The Statue of Liberty 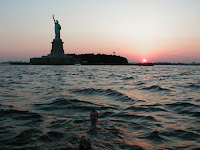 Bill Ireland, a renowned masters swimmer who has traveled the world and done most of the world's top 100 open water swims, added another swim to his impressive record.

"The Liberty Island Swim [on June 26] was an unusual and special swim for many reasons," said Bill.

"It had been nearly four years in planning because of the logistical challenges associated with swimming from a highly secure national monument. We had to start and finish before the general public [visited the Statue of Liberty], which meant we were checking in at 5 am and going through metal detectors before boarding boats at 5:45 am."

"The race was a water start, a counterclockwise circumnavigation swim with seven buoys and two docks on the course. The currents and surface chop varied as you circled [the island. The race was very well run and had swimmers who had traveled from most of the Eastern Seaboard and some left coasters. It was truly unique to see the Statue of Liberty up close and from the water. Definitely a race worth swimming."

Photo from Swim the Apple.
Posted by Steven Munatones