It's A Small World...Getting Bigger

182 national federations and 2,848 athletes will participate in the 13th FINA World Swimming Championships. At the 2007 World Championships in Melbourne, Australia, there were 167 countries and 2,158 athletes. The final numbers in Rome could increase in the weeks to come as final entries are soon due. 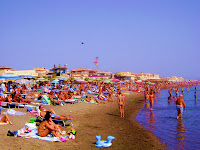 In 1973, at the first FINA championships in Belgrade, there were 47 countries in attendance.

The global growth in aquatic sports can be seen below in the number of countries that have sent their best athletes to FINA world championships:

Talking about more people, the two photos above show the open water swimming venue on a weekday and on a weekend when more people flock to Ostia Beach in Rome, site of the 5K, 10K and 25K races.
Posted by Steven Munatones