It'll Come Down To The Finish 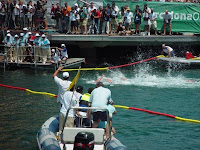 Being an open water swimming judge at the World Swimming Championships is not an easy task. Like water polo, much action takes place underwater and happens in a flash, requiring the judge to make an instantaneous call without the benefit of an instant replay and while the action and athletes continue forward, all while standing in a boat, sometimes in wavy conditions.

But, unlike water polo, the judges often times have a large pack of swimmers - up to 40 athletes - to oversee, all fighting for position and a medal.

The following individuals have been selected by FINA to serve as impartial judges in Rome based on their years of experience and comprehensive knowledge and passionate commitment to the sport:

The difficult decisions of determining the close finishes will be made by the finish judges.

They will be aided in making their decisions by three cameras placed at different positions, all focused on the finish touch pads.

Upper photo is from the extraordinarily close 25K race at the 2003 World Swimming Championships when three men finished so close together - after five hours of hard swimming - that it took several minutes for the finish judges to review the photo-finish and make a determination who actually won.