To Close Or Not To Close 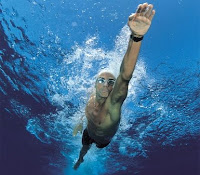 "Close your fingers!" has been shouted by more than one swimming coach to young swimmers learning how to swim freestyle. But is that the best way to swim?

The group conducted a study to determine the effect of finger spread on the propulsive force production in a swimmer's hand 3D model using computational fluid dynamics, a methodology used to analyze the hydrodynamic forces in swimming.

The team created a 3D domain to simulate the fluid flow around three different models of a swimmer's hand with different finger spreads: (1) fingers held closely together, (2) fingers with a slight spread (0.32 cm)

and (3) fingers with a large spread (0.64 cm). The models were created by computer tomography scans of an actual male swimmer's hand. Numerical simulations were calculated in three dimensions with the pitch angles of the hand models at 0°, 30°, 60° and 90° to determine drag and lift coefficients.

They found that the model with a slight finger spread presented higher values of drag coefficient than the models with the fingers closed and the fingers with the large spread. The values for the lift coefficient presented little differences between the three models for any given pitch angle.

In summary, the results suggest that fingers slightly spread can allow the hand to create more propulsive force during swimming...which is exactly what many top coaches teach and top swimmers do.