Coming Together For the World Swimming Championships 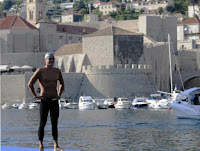 The World Swimming Championships are coming up in Rome in July, the first major international competition after the successful Beijing Olympics.

The national governing bodies at the elite levels of marathon swimming prepare and select their top athletes in a variety of ways.

The Mexican national open water team was selected during the races on the FINA Open Water Swimming Grand Prix circuit in Mexico.

Germany is holding their national team qualification races in a lake in Germany in a few weeks.

Russia is holding their qualifications at their national 5K, 10K and 16K championships in late June in Anapa in the Black Sea.

Canada and the USA are jointly holding their qualification races in the Ft. Myers beach in Florida in mid-June. USA Swimming will conduct one race (the 10K) off of which all its 5K, 10K and 25K swimmers will be chosen.

British Swimming is holding its qualification races at the first stage of the LEN Open Water Swimming Cup (Ligue Europeenne de Natation) 10K race in Israel this weekend. Besides the top European swimmers, including Olympians Brian Ryckeman of Belgium and Richard Charlesworth of Great Britain, Natalie du Toit will also compete in a tune-up swim for the World Swimming Championships.

While Brian has already qualified for Belgium, Richard and Natalie still must perform well to represent their countries. Natalie only has to swim under 2:30 to qualify, which should not be a problem. "It's a pretty tough time, but I am getting better and better at open water. I've got a few races coming up and I'm feeling sort of confident, sort of not. I've put so much into the 10K and I'm really looking forward to the world championships."

The Italians welcomed Natalie in their national championships which will concurrently serve as their qualification races including the 5K race in Piombino on June 7th, the 10K race in Lerici on June 2nd and the 25K race in Formia on June 14th.

As the summer months roll on, the world prepares for Rome.

Photo of Luca Ferritti of Italy by Giorgio Scala of deepbluemedia.
Posted by Steven Munatones

If I do not deal badly and do not remember badly too, Richard Charlesworth was not Olympic...

I understood that Richard placed 7th in his heat at the Beijing Olympics when he did a 15:17 in the 1500-meter freestyle.