As a follow-up to his 1K swim in the South Pole, Ram (shown on left) swam with a fellow extreme swimmer, 40-year-old Andrew Chin (photo below) in Lake Zürich following standard English Channel rules.* 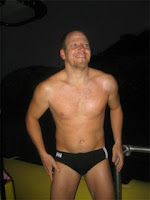 Andrew said after his unprecented 1.37K swim in 23 minutes, "Within minutes of diving into the lake, I lost feeling in my hands and feet. In fact, I was completely numb by the time I decided to stop swimming." In order to take his mind off the pain during his swim, Andrew repeated his wife and children's names in his head while swimming a bit further than his goal. "When I started battling to say their names, I knew it was time to get out. All I remember is the support team dragging me into a boat and covering me in blankets."

Ram, who swam 2.2K in 45 minutes, said he had decided to continue when Andrew got into the boat despite being painfully cold. "The last 500 meters were very hard. I was breathing into a headwind of -7°C (19°C) so each gulp of air was icy and painful. I tried to close my hands into fists, but couldn't. They were frozen stiff."

Towards the end, a police diver in one of the four support boats jumped into the lake and swam alongside Barkai fearing the worst. "I really wanted to finish the swim, but was struggling. I kept my eyes locked on the team doctor each time I breathed and knew if he wasn't worried about me, then I was okay."

Barkai started hyperventilating after finishing his swim, but with support from the doctor he brought his breathing back to normal. The finish of the swim can be seen here on Swiss TeleZüri.

Ram's pain was clearly evident on TV when he can be heard saying to his support team, "I can't move," after being pulled from the water. At the same time, it was also clear that he was concerned for his colleague when he quickly asked, "How's Andrew, is he OK?"

Ram's preparation and acclimitazation to the cold water was admirable. After taking a warm shower, Ram recovered remarkably quickly. "It was only after 30 minutes in a hot shower that I started recovering. I don't remember anything at the end, except that I was dragged out of the water. I couldn't stand."

Despite having swum the furthest south of any human on record, Ram said, "The wind chill factor had made this definitely the hardest swim I have ever done." 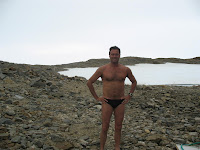 * Channel Swimming & Piloting Federation rules state, 'No person in a Standard attempt to swim the [English] Channel shall use or be assisted by an artificial aid of any kind, but is permitted to grease the body before a swim, use goggles, wear one cap and one costume. The word 'costume and cap' shall mean a garment, not made of neoprene or rubber or any other material considered by the Federation to give a similar type of advantage, and not in any way designed to contain body heat, and/or aid buoyancy.'
Posted by Steven Munatones