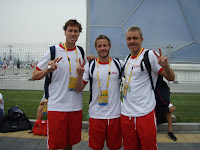 Mark Warkentin certainly has one of the world's most accomplished brain trusts of any athlete at the Olympics.

Throughout Mark's career, he has been coached by some of the world's most innovative and accomplished coaches. In Beijing, Mark will have the benefit of having FIVE of his former and current coaches to provide him support and guidance.

These individuals and the years they coach Mark include:

1. Larry Liebowitz (who coached Mark from 1993-1995), head coach of Oregon State, is currently coaching a Japanese swimmer in Beijing.
2. Mark Schubert (1998-2003) is in Beijing as the USA Swimming National Team Head Coach and General Manager
3. Frank Busch (2003-2004) is in Beijing as the USA Olympic Swim Team assistant coaches.
4. Gregg Wilson (2004 to present), head coach of UC Santa Barbara, will be in Beijing to watch the 10K.
5. John Dussliere of the Santa Barbara Swim Club (2006 to present) is serving as the American Open Water Men's Head Coach.

Photo shows Mark with his training teammates Eric Vendt and Klete Keller in Beijing hours before the opening ceremonies.

Thank you very much, Norm. Those changes and corrections are made.