No Harm No Foul - Reffing the Olympic 10K Marathon Swim

What does a head referee do and why is the job so critical in the sport of open water swimming? Read on. 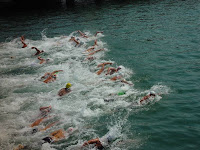 25 highly motivated, aggressive open water athletes will swim four 2.5K loops on the Olympic rowing course, fighting around 16 turn buoys, swimming in and out of feeding stations, and sprinting in a frantic rush to touch pads raised a few feet above the water.

If the race unfolds as expected, the 25 athletes will swim in a large tight pack, each close enough to not only rip the goggles right off the heads of each other, but also to snatch the gel packs from the swim suits of their rivals.

The 25 athletes have their own dreams and expectations: Dreams of Olympic gold...and expectations of getting hit, bumped, pulled, banged, elbowed, kneed, cut off, scratched, kicked, yanked and jostled throughout the race.

How do the head referees keep order in open water? How do they give fouls and give disqualifications while the athletes continue to swim?

At the Olympics, there will a head referee, two assistant referees, turn judges and feeding station judges on the floating pontoon. All officials will be in constant contact with one another via hand-held radios.

The head referee and the two assistant referees are positioned in boats along the course and work hand-in-hand with their boat drivers who navigate as closely as possible to the swimmers, without creating a wake.

The head referee positions himself close to the second and third swimmers in the lead pack and makes himself visible to everyone in the lead pack by intensely watching the swimmers for the entire 2-hour race from the bow of his boat.

The assistant referee positions himself further back in the lead pack in a separate boat, constantly watching for rule infractions. Because the first 2-3 loops of the 4-loop 10K race will probably include all 25 entrants at the Olympics in one large tightly bound pack, you will see 2 referee boats positioned only a few meters from the entire pack - the head referee towards the front, and the assistant referee towards the back.

What are the possible infractions?

Under the general unsportsmanlike rule, athletes can be disqualified for making intentional contact, obstruction or interference with another swimmer. Such unsportsmanlike conduct is judged solely by the head referee.

But with swimmers constantly bumping each other, the referee's key consideration is if the contact was intentional or not. A very high majority of the occurrences are simply unintentional instances of contact that do not require intervention by the referees and are an integral part of the sport.

On the other hand, when swimmers are swimming too aggressively, the referees quickly become pro-active and try to mitigate further escalation of inappropriate physical altercations among the swimmers.

Warning whistles and directives given by hand motions are repeatedly used by the referees. For example, when three swimmers are swimming together and the two outside swimmers start to squeeze the middle swimmer, the referee will blow his whistle and give hand signals to instruct the two outside swimmers to separate and give the middle swimmer some room. On the other hand, if swimmers lock arms while swimming stroke for stroke or run into each other during the crush around the turn buoys, the referee generally judges this contact to be unintentional.

While most physical contact among the swimmers is viewed as accidental or part of the sport, there is a subjective element that is entirely dependent upon the referee's experience and perspective.

Can athletes be disqualified?

At the first rule infraction when the referee judges contact to be intentional and unsportsmanlike, the head referee shows a yellow flag to the swimmer(s) with a card bearing the swimmer's number. This number is written with black markers on their shoulders, shoulder blades and back of hands for identification purposes.

On the second infringement, the swimmers are shown a red flag and a card bearing their number, and they can be asked to immediately leave the water.

So what kind of race is expected in the Olympics?

It will be an extremely tactical and close race, carefully monitored by Dennis Miller and Ronnie Wong and their teams. Whistles and yellow cards will add to the excitement of the race...and hopefully, no red cards will be issued.

Photo by Dr. Jim Miller of the start at the 2003 World Swimming Championships 5K race.