Dennis Miller of Fiji and one of the most experienced FINA officials, will handle the all-important head referee's position during the women's Olympic 10K Marathon Swim in a few days. Dennis reported the water conditions at the Shunyi Olympic Rowing-Canoeing Park to be an almost dangerously warm at 31ºC (87.8ºF). 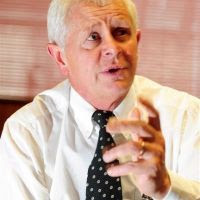 Upper photo shows end of the 10K women's qualification swim in Seville by Javier Blazquez where the water and air temperatures were not nearly as high as Beijing is. Lower photo shows Dr Dave Gerrard taken by Craig Baxter.
Posted by Steven Munatones