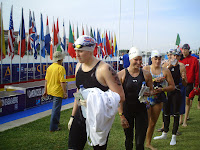 During the 800-meter freestyle finals in Beijing, it did not appear that Cassandra Patten took off the blocks as quickly as she normally does in her 10K marathon swims. Of course, she was swimming against Rebecca Adlington who did a 8:14, breaking Janet Evans' longest standing world record in the books - and who was at world record pace throughout the swim.

But Cassandra (often referred to as Cassie in the UK) achieved one of her Olympic goals by qualifying in the final with a 8:25, ahead of the top two Americans. Cassie finished 8th in the finals with a 8:32.35.

Watch her bounce back and compete strongly against Larisa Ilchenko of Russia and Chloe Sutton of the US and Mission Viejo Nadadores on August 19th.