Shelley Taylor-Smith caught up with former British Prime Minister Tony Blair, who was leader of the Labour Party from 1994 to 2007, in Beijing.

Taylor-Smith encouraged the sports-loving Blair to go out to the Shunyi Olympic Rowing-Canoeing Park to cheer on the top British 10K swimmers including David Davies, Keri-Anne Payne and Cassandra Patten. 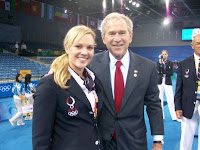 With Patten and Payne supported by Prime Minister Blair, Russia's Larisa Ilchenko cheered on by Vladimir Salnikov and Chloe Sutton with President Bush in her corner, it will be interesting to see what national flag will be flying highest during the awards ceremony.

We are behind you! And we are proud to know your Aunt Deb! :)

Maybe opening ceremonies was a bad idea?? Too bad... well at least she has a picture to bring home... can't wear it around your neck though.

It just wasn't Chloe's day today. She said the pace was just too much for her on this particular day.

Thats too bad, really unfortunate. I hope she learns. I seem to recall many a champions repeating the mantra: "it doesn't matter how you "feel"... you just gotta get it done."