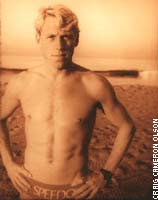 NBC announced that Rowdy Gaines and Craig Hummer will be the Olympic 10K Marathon Swim announcers at the Beijing Olympics.

Gaines, the well-known and personable triple gold medalist from the 1984 Los Angeles Games, will serve as the Open Water Swimming Analyst. He will be working his fifth Olympics for NBC and will also cover all 9 days of the pool events.


Hummer will be equally busy as his reporting duties will take him all over Beijing. In addition to the Olympic 10K Marathon Swim, Hummer will do the play-by-play for the cycling events (road, BMX and mountain bike), triathlon, canoeing (white water) and synchronized swimming.

There is no one better prepared to explain drafting, navigating, pacing, feeding, buoy turns, the physical contact, the frantic finish...and the underdog status of the Americans than Hummer.

Because physical contact, especially at the start, turns and finish, was a large part of these competitions, Hummer will provide great coverage based on his first-person experiences.

NBC is predicting Olympic 10K victories by Larisa Ilchenko and Thomas Lurz, which will put Hummer in familiar territory when announcing the open water moves of America's Chloe Sutton and Mark Warkentin.

Years ago, when Craig first entered the Australian Surf Lifesaving Championships, the editor of Inside Sport, Australia's largest sports publication, said, "As good as he is, nobody thinks for a moment that a Yank can win."

Photo by Craig Cameron Olson of a young Hummer

Isn't Craig Hummer the guy who is doing commentary on the Tour de France right now?