Then And Now In The San Francisco Bay

The photo on left from the Dolphin Club archives shows swimmers jumping into San Francisco Bay for a Golden Gate Bridge swim in 1931.

No goggles. No wetsuits and an escort boat crew dressed nicely with jackets, coats and hats. 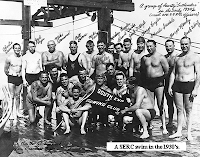 The photo on left is from the South End Rowing Club archives of Bill Pickelhaupt that shows swimmers in San Francisco Bay in the 1930's.

Endurance athletes abound. Extreme sports are booming with popularity. We see many athletes with wetsuits getting in the Bay and hear of ice caps melting due to climate change. So are the oceans getting colder?

Hmmm, we think not for there are still many hardy swimmers who swim as their predecessors did in the 1930's.
Posted by Steven Munatones