Aulea Across Auau - Swimming Together Harmoniously 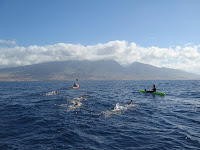 21 swimmers of the Aulea Swim Club on Oahu swam their fourth annual crossing of the 8.8-mile Auau Channel between Lanai and Maui this weekend.

When Triple Crowner Mike Miller told coach Mark Baker that his swimmers could swim a channel, literally swimming from one Hawaiian island to another, his first reaction was to laugh, "You have got to be kidding!." 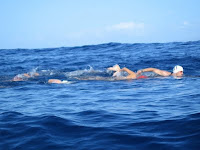 But the coach and his swimmers we began to adjust and accept the concept of swimming 8.8 miles for its challenge and encouragement to strive to accomplish something that most people would think impossible, if they put their mind to it and prepare accordingly. "This is something that I think is important for all people, especially the youth of today, to realize," explained Mark.

"This year, we had three groups, each escorted by a boat and kayaks. The first two groups had five swimmers each and the third group had eleven. But we started as a group, swam as a group and finished as a group." 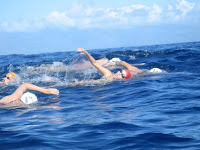 "The ages ranged from the youngest swimmer at 10 and the oldest at age 53, but most of the swimmers are between ages 12 and 17. We encountered hundreds of jellyfish that caused painful stings this year, but the people on the escort boats saw whales this year.

The first year when we were greeted by many dolphin about 20 minutes at the end of the crossing." 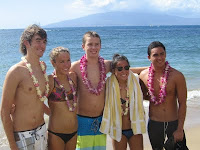 "The swimmers were prepared well, both mentally and physically. "I place a high value on the mental preparation. This is done by talking to the swimmers about what this swim will be like and the fact that they will have doubts about their ability and desire to finish. The physical preparation involved the routine workouts coupled with weekend swims that progressed from one- to four-hour ocean swims."

"A very important part of the training is learning how to just swim. For example, the hydration breaks are just that, hydration breaks every half hour. We don’t want to stop to talk, fix goggles, or discuss how tired we are. We want to hydrate and go. I was really impressed with the swimmers ability to learn and follow through on this concept."

The tradition will continue.
Posted by Steven Munatones