Although the water can get cold and rough, Southern California has arguably produced the greatest number of open water swimming stars of any metropolitan area in the US.

The incomparable Lynne Cox, who has swum in perhaps more bodies of water than any other human alive, has spent countless hours training in - and writing about - the open water near her home in Seal Beach.

Pomona's Penny Dean (shown above) has held 12 world marathon swimming records, including the English Channel from 1978-1994.

7-time world professional marathon swimming champion Paul Asmuth trained in Mission Viejo while he was winning an incredible 59 marathon races in his career and is currently leading a resurgence in American elite open water swimming.

Greta Anderson, a former Dutch Olympic champion and certainly one of the greatest marathon swimmers of the 20th century, works and lives in Los Alamitos. 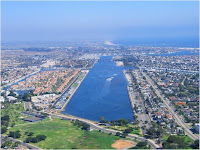 So it is not surprising that USA Swimming will hold its 2010 national select open water swimming - for many of its most promising long-distance freestylers interested in open water swimming - in Long Beach, California right before the national 5 km and 10 km championships in the same location (Marine Stadium shown on left).

Steve, what are the dates for the 5/10 national championships and selection races in Long Beach?

June 4 for the 5K and June 6 for the 10K with the USA Swimming national open water swim camp held June 2-5. I will be one of the coaches for that elite camp where the top 1500-meter swimmers in the US are invited and introduced to the sport of open water swimming.