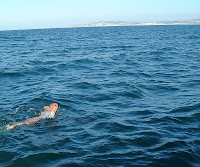 Yesterday, we compared the Ironman Triathlon to major marathon swims and are received interesting feedback received from cross-over athlete Anthony Smith. Anthony can speak from experience as he successfully completed the English Channel in 2005 in 14:08, the 1992 Ironman Canada in 11:08, the 1994 Ironman Japan in 11:45, the 2008 Ironman Western Australia in 11:20 and the 2009 Ironman UK in 12:32 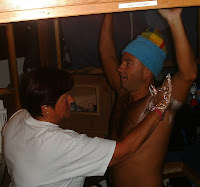 So, in answer to yesterday's question, "Is a full Ironman Triathlon easier or harder than any of the major marathon swims around the world?", this is how Anthony answered:

"It is very difficult to compare the two challenges which are both fairly extreme, but here are a few observations:

1. In terms of pure physical fitness required, I'd say the Ironman was tougher.

2. In terms of pure mental toughness required, the English Channel is a great leveller.

3. There is usually a 17-hour cut-off for Ironman to cover the 140.6 miles of swimming, biking and running, whereas in the English Channel, you can be out there for say 22 or 24 hours for a solo crossing (i.e., there is no cut-off time).

4. The Ironman has a lot more distractions (i.e., you are doing 3 disciplines instead of only one, plus there are usually 1,500 or so fellow competitors which usually ends up with a race within a race with athletes of similar ability).

5. A solo English Channel swim doesn't have such distractions and is undertaken in relative solitude (apart from feeds, etc.).

6. Both events are sufficiently long enough to feel real pain: mental, physical, etc. Even if you are having a really bad day, it doesn't matter as there is plenty of time to recover and get back in the race. This way at least you always come away with some great learning and positives even if things don't go exactly to plan. I have never had the perfect race yet, but am getting closer and more confident.

7. One thing for sure is that both challenges require full respect and proper careful preparation and if you haven't put the work in they both have the capacity to bite you on the a$$ badly.

So what does that lot tell us? Not a lot other than both events are extremely tough and take anything from 12 months to 3 years to prepare for - and even then, there no cast-iron guarantees of success. I admire anybody who makes it to the start line.

Jenny Fitzgerald, the Secretary of the Jersey Long Distance Swimming Club and another cross-over athlete who has done both the English Channel and Ironman, says in response:

"Great question! I tend to agree with everything that Anthony has said, but personally I feel that Channel swimming is tougher. I have always said that I would do another Ironman, but probably not another solo crossing.

Physically, in an Ironman there is always the chance to sit and rest if need be, but in swimming you still have to support yourself in the water and can't relax totally. There is the relief of changing sport in triathlon that you don't get with just swimming.

Swimming is quite technical compared to cycling and running, so fewer weak or non-swimmers would ever consider a channel swim unlike in cycling or running where complete novices will do a marathon or long bike ride. The 2.4-mile swim in an Ironman isn't off putting for a weak swimmer whose strengths lie elsewhere.

As Anthony mentioned, Channel swimming is done in relative solitude and that requires a mental toughness that you don't need for an Ironman. With the Ironman, there is a certain amount of relief and satisfaction knowing that people around you are suffering like you are which you don't get swimming the Channel.

Also it might be considered a minor point, but with a Channel swim, you might have to contend with the fact that the weather will be rubbish and so have to deal with the disappointment of not being able to swim and train again for another year to achieve your goal. Either way you have to be a bit potty to contemplate doing either of them, let alone doing both or swimming the channel more than once."