King And Queen Of The Sea In Brazil 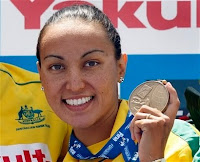 The new 10K Sea King Challenge will take place in Copacabana, the same location as the 2016 Olympic Games, in what will be a major showcase of what Brazil can do in the open water.

Poliana Okimoto fresh off of her FINA 10KM Marathon Swimming World Cup championship, was already awarded Queen of the Sea and will be awarded her crown 2009 on race day.

In a unique twist that will be entertaining for Brazilian television, the athletes will do five 2K laps, but on each lap they will exit the water, run up on the sandy beach and then dive back into the water. The race will be televised on Brazil's largest TV broadcaster TV (Rede Globo) live in on one of the most popular Sunday morning shows, the Esporte Espetacular.

In another interesting twist, the race will be a contest to see who is the King of the Sea as the top five Brazilian athletes will face five top foreign open water swimmers with a cash prize to the top three finishers of R$ 10,000.

Stay tuned. We will be reporting more as the sport of open water swimming takes new and entertaining twists and turns in its road to global expansion.