A Dream Of Global Proportions 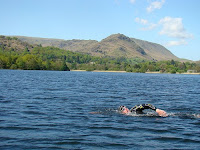 There are few people in the world of endurance sports who dream as big as Dan Martin does.

In May 2010, the 28-year-old intrepid British adventurer will attempt the 5,800K (3,603-mile) ocean swim leg of an unprecedented solo Global Triathlon where he will literally swim, bike and run around the world.

According to credible swimmers, Dan has been training hard in the English Channel, Jersey, Ireland, the North Sea and Tenerife in the Canary Islands in all kinds of conditions. Dan says, "I am now feeling pretty comfortable in even quite big swells." He better feel comfortable because the Atlantic will thrown everything at him during his time at sea.

Dan plans to swim from New York to Brest in northwestern France in an estimated 3-4 months. After his swim leg, Dan will cycle from Paris to Alaska and then finish his Global Triathlon by running from Alaska back to New York where he will finishing with the New York Marathon.

"Recently I’ve found the ideal ship to support me while I’m swimming the Atlantic. She’s an expedition ship called Ice Maiden, she sleeps ten and can hold all the food and fuel we’ll need for the crossing. My route planning is going well for the cycle and run, with most of it set in stone now. The Bering Straits [on his cycle leg] is still a huge stumbling block but I’m working on various ways of crossing it," Dan explains.

In an understatement of the year, Dan said, "I’ve done some pretty tough stuff in the past, but this will undoubtedly be my biggest challenge. It scares me just thinking about it."

Despite the estimated 8-20°C (46-68°F) water of the north Atlantic from May to August, Dan says that he will not use a wetsuit.

Dan plans to swim eight hours a day, but we are confirming how he will define his stage swim across the Atlantic Ocean. Will he use the currents to float across the ocean as did Guy Delage from Cape Verde Islands off of Africa to Barbados in 1991, Benoit Lecomte from Cape Cod (USA) to Brittany, France in 1998 and Jennifer Figge from Cape Verde Islands to Tobago in the Caribbean Sea in 2009? Or will he mark his progress each day with GPS technology so the world can track his program? Will he start the next day at the precise location where he finished the previous day? However way he swims, floats or traverses his way across the Atlantic, it is an epic feat that are within the physical, mental, emotional, logistical and financial capabilities of only the most trepid adventurers.

Assuming Dan takes 4 months swimming 8 hours per day at an average rate of 3 miles per hour (4.8K per hour) - which is an extremely fast clip for even the world's best marathon swimmers swimming for only 8 hours for one day - Dan will cover a total of 4,608K (2,880) over the 120 days. Which means that he will have to work in another 1,092K (723 miles) somehow during his time in the Atlantic. He would either have to swim faster, which would not be possible without fins, take longer, which is always a possibility, or go along with the currents, which is probably the easiest and most logical means to make up the distance deficit.

But what separates Dan from the average person is that he has planned, prepared for and mentally broken down his epic adventure into manageable, human-size proportions. Incredibly and admirably, the 5,800K distance seems to be less of a concern than others. "The biggest hazards I’ll face day in and day out will be chaffing and cold. The temperature will vary from 8-20°C on my route with the early days being by far the coldest. I’ve trained a lot in cold water and am gaining lots of weight to help with the cold and buoyancy."

Distance seems to be Dan's forte after having cycled from Korea to South Africa and then from London to Cape Town the year before - covering over 55,000K between the two trips.

But the Global Triathlon is not entirely about Dan who has created the Dan Martin Foundation to touch the life of all who he meets while raising money for good causes, especially those that improve the lives of children.

We will be closely covering Dan's swim and greatly look forward to a successful first leg of the world's first Global Triathlon.
Posted by Steven Munatones