The Australian Torch Has Passed To Melissa Gorman 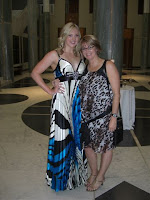 More than 5000 votes were received for Australia's Telstra People's Choice Award that was held at the Parliament House in Canberra this past weekend.

Deservedly and not surprisingly, Melissa Gorman won the Open Water Swimmer of the Year award for her gold medal victory in the 5K at the 2009 World Swimming Championships. The Open Water Coach of the Year was Ken Wood, who not only coaches Melissa, but has coaches numerous Olympians and world-record holders over his 40 years of coaching.

Melissa pulled off an incredible upset at this year's world 5K championship in Rome, won US$10,000 in the winner-take-all RCP Tiburon Mile in San Francisco and won other events including Fiji's 3K and 10K swims at the Pacific Swims event in Fiji.