Swimming In The Dark 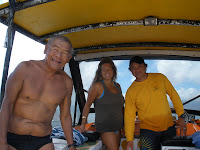 Carl Kawauchi of Honolulu swam the 8.5-mile Pailolo Channel from Maui to Molokai on his fourth career channel in the Hawaiian Islands.

Kawauchi has also crossed the Auau Channel (Maui to Lanai), the Kalohi Channel (Molokai to Lanai) and the Alalakeiki Channel (Kahoolawe to Maui).

Due to the swells on Maui, Kawauchi had a difficult time selecting a start location on the lava rock shore and then later faced a slew of Portuguese man o' war and box jellyfish, but he finished in 4 hours 45 minutes.

During his swim, the local authorities closed the beaches where he started his swim due to several 12-14 foot tiger sharks feeding in the area. Kawauchi recalled, "The sharks probably were there when I started, but it was dark and I didn't see anything. I'm glad I didn't see them. If I saw them I probably would have aborted the swim."

Carl, your the MAN! Great to read about your swim. My swim homies here on Whidbey Island are in AWE. Way to go!

Nice photos thanks for the posting,really great to read about your swim,