Samurai Spirit Lives In the Channel

Miyuki Fujita, a popular English Channel swimmer from Aichi, Japan, added to her channel folklore by completing her 7th successful solo swim yesterday after 17 hours and 18 minutes under tough conditions.

Instead of resting on her laurels, the 42-year-old gallantly turn right around. 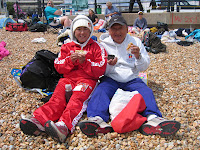 With the global channel swimming community rooting for her, Miyuki headed right back to Dover on a double-crossing attempt.

Known as the Japanese Channel Queen, Miyuki steadily swam under the guidance of her coach Ishii (shown on left) and International Marathon Swimming Hall of Famer Freda Streeter with a twinkle in her eye for which she is known.

Throughout her 29+ hour effort, Miyuki battled against the elements, without complain, extending beyond her own physical limitations.

Freda summarized the ordeal, "They have just pulled Miyuki from the water after 29 1/2 hours. She had a really bad cramp as she had just reached the English inshore shipping lane. She had a bad one-way with the wind on her face all the way, but she stuck at it."

Up and down the waves and against a stiff wind, Freda took a long-term view of Miyuki's two-way attempt, "[The English Channel] is always going to be there. She really is remarkable, and if the wind had not of sprung up early on the outward crossing I am sure she would have made it, but that is the Channel for you." 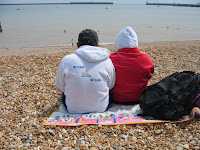 In the words of Cliff Golding, "Miyuki is the kindest, most helpful, unassuming, yet tough-as-nails woman."

We could not agree more.