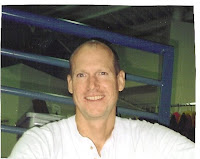 The purpose of the poll was to recognize all the nominees who, in turn, represent all that is good with open water swimming and its enthusiasts.

The nominees from 11 countries (America, Australia, Bulgaria, Chile, China, Germany, Netherlands, New Zealand, Russia, South Africa and the U.K.) ranged from world-class teenage swimmers to administrators who have guided the sport for decades. 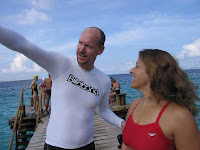 The 2008 World Open Water Swimming Man of the Year is Randy Nutt who outpolled an extremely accomplished field. Based on his decades in masters swimming, volunteering for a number of positions and organizing boutique swims in the Caribbean, Randy received consistent support throughout the public voting, leading from nearly start to finish.

The parallels between Randy and the poll’s second-place finisher, Maarten van der Weijden of the Netherlands are striking. Similar to Maarten’s victory in the Olympic 10K Marathon Swim in Beijing, Randy’s victory was a result of many years in the sport. Very importantly, both Randy and Maarten have always lent a hand, sharing a passion and supporting others, on their way to victory. Their willingness to smile under stress and spend time with others are what makes them stand-out as victors – and representative of all that is good and impressive with this year’s World Open Water Swimming Man of the Year nominees.

Congratulations, Randy. We commend you for your passion and thank you for your efforts to host the unique and popular Bermuda Round the Sound Swim and Bonaire EcoSwim.

As a former Marshall University Swimming college teammate, I can attest that Randy has always been as helpful and inspiring as he is today. When I was a wet-behind-the-ears freshman, it was Randy who was always willing to give advice, help with homework, motivate and help me out with the typical freshman "problems".

When Randy graduated and moved on, he gave me a huge, broken-off conch shell he had that he used to bring a little bit of Florida into his West Virginia dorm room....I still have it to this day!