Eat Well and Blame It on Third Spacing 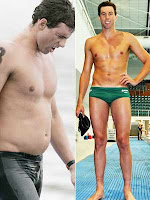 During the holiday season, people around the world relax and eat well with their family and friends, often exercising less than they normally do.

But, if you are an open water swimmer, you have a built-in excuse. Blame it Third Spacing.

As often happens in salt or brackish water, the body naturally swells from the prolonged exposure to water. This is why many open water swimmers look bloated and soft when they exit the water after a long swim. Many swimmers appear out of shape, especially around the stomach, hips and thighs, after long open water swims. 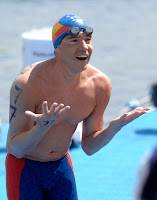 There is physiological phenamenon known as third spacing that causes the human body to appear waterlogged or swollen. Third spacing can also be accentuated by a loss of electrolytes. This results in extracellular fluids going out of the blood vessels and into the skin tissue that normally is not perfused with fluids.

And, as many ocean swimmers know well, the effects of third spacing are more noticeable based on the water salinity and duration of exposure.

So if you are less photogenic than normal after a long swim or holiday meal, blame it on Third Spacing.

Third spacing photo of Grant Hackett taken after his 10 km swim at the 2008 World Open Water Swimming Championships from the Sydney Morning Herald.