Sheppard And Brown Swim-Run To Victory In Lorne

With an estimated 20,000 spectators packing the beach in an electrified atmosphere, 18-year-old Sam Sheppard out-swam and out-ran an accomplished field to claim his first overall victory among the over 4,300 swimmers in the highly competitive 1.2K Lorne Pier to Pub swim in Lorne, Australia.

On the women's side Harriet Brown overcame leader Micha Burden-Shaw to beat the Californian marathon swimmer and lifeguard by a scant four seconds with a long shallow-water dolphin leg and furious sprint up the beach.

"It's very different, I think that compared to last there was a lot more pressure this year because I won it last year," Harriett said. "I'm so happy to win this, it's a great event. A lot of my friends and family are watching, so it's great. At the start we were all pretty spread out, so I wasn't really sure where anyone was, I was swimming with a few guys, and about a quarter of the way through I saw her just in front of me. So I was swimming behind her, pretty close to her for most of the way in and then (I passed her) just up the beach. I love running, so I enjoy a sprint finish." 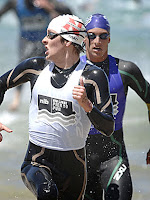 Sam also greatly enjoyed himself, "I really wanted to win it because I've come so close before and I hadn't done it the last couple of years."

"I was just really happy with it and I've been in full training so hopefully this goes a long way to (performing well) in the (Australian) world open water swimming trials (in February)."