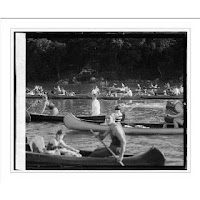 One of the first national open water swimming championships held in the United States may have been held in 1925.

The course stretched from the Chain Bridge to Georgetown in the Potomac River near Washington D.C., although races in other parts of the United States, such as the La Jolla Rough Water Swim in California, started earlier in 1916.

Captain Tim Johnson provided some historical background on the emergence of open water swimming on the national level in America.

In August 1925, then-American President Calvin Coolidge sponsored the national open water swimming championship in the Potomac River over a 3-mile course. It was an annual event, called the President’s Cup, hosted by the Washington Canoe Club..

According to Johnson, the governing body AAU designated the event from Chain Bridge to Georgetown as a national championship event where up to ten swimmers could compete from each club, but only the first three finishers scored points. Because each swimmer was escorted by a canoe, the Washington Canoe Club served as an excellent host. The winning team kept the President's Cup for a year and returned the following year to defend its title in the years before the Great Depression. 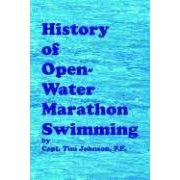 But the history of national open water swimming championships in the United States goes back further than 1925 according to Johnson. "[The swimmers] were constantly racing and [they were] calling [the events either] championships or All-American something beginning in the 1880's (described in the History of Open-Water Marathon Swimming). The New York Athletic Club hosted events either in the Harlem River starting in the 1880's or at Travers Island from floating docks."

Johnson continued with his authoritative grasp of open water swimming history, "I'm sure the New York Athletic Club has the last trophy called the President's Cup in their display cabinets.

There were also local races that weren't as publicized in Philadelphia, Washington, San Francisco, Chicago and Boston [starting] from the 1880's which is included in the [History of Open-Water Marathon Swimming].

But there was not much consistency from year to year which happened in the 19th and early part of the 20th century. The start of the NSA in 1883 in Philadelphia was interesting because the AAU was functioning at that time. The "informal half mile 1885" claimed the record for the 1/2 mile that fueled sanctioning organizations. I was surprised to see 8-time Charlie Daniels listed in an open water contest, but that is what Travers Island [competitions] were in the beginning. They swam between floats in Long Island Sound."

The AAU (Amateur Athletic Union) records show a slew of interesting national records accepted in 1902 for the following events:

Schaeffer, whose nickname was Midget, was the first great American college swimmer who took his talents to the open water where he set numerous records. And, like other talented swimmers of that era, he did not limit his athletic exploits to merely competitive swimming. He held the American record for swimming underwater (232 ft. 11 in), was a diving champion, an accomplished water polo player.