Back in the 1970's, a quiet, hard-working open water swimming team in Southern California, coached by Siga Rose, had a number of young ocean swimmers who trained constantly along the coast of California. Those swimmers - Lynne Cox, Penny Dean, John York - eventually became world-famous as they went on to set numerous records in channels around the world.

Dial forward forty years and there are now hundreds of open water swimming teams, groups, clubs, societies and associations flourishing around the world.

Here are a select few in no particular order: 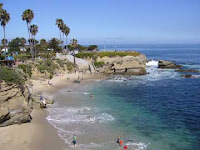 1. La Jolla Cove Swim Club that trains in La Jolla Cove just north of San Diego. The club is an informal organization of friendly people who like to swim in the ocean with training sessions and sponsored activities once a month. The club organizes a Polar Bear Swim on New Year's Day, the 1.5-mile CYA Across the Bay Swim in June, and the 1.5- and 5-mile Tour of Buoys Swim in early August.

Club members and non-members swim in the beautiful La Jolla Cove daily usually around 6:30 am, 8:00 am, 9:00 am, 11:00 am, 4:00 pm and other times throughout the day regardless of weather and water temperature throughout the year. Some swimmers swim less than 1K while others train for the English Channel, Catalina Channel, Cook Strait and other marathon swims.

3. Tower 26 (see photo above) is an ocean swimming group of nearly 300 seriously competitive athletes of all ages and abilities who enjoy (free) hard-core ocean workouts in Southern California, headquartered appropriately at Tower 26 on Santa Monica Beach. The workouts are geared towards learning and practicing positioning, drafting, turns, starts and finishes.

The practices are preceded by a warm-up period and end with presentations from a number of new product vendors and service providers, but the 60-minute in-the-water practices quickly morph into a high-intensity, high-energy friendly competition where a mix of world championship swimmers, professional triathletes and beginner endurance athletes are each placed in their appropriate groups. 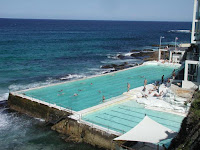 The clubs hold training sessions and teach nippers how to handle themselves - and others - in the ocean. The club tirelessly and passionately promote all forms of open water athletic events in a social, enjoyable manner. Two examples - representative of what is available in Australia - include the Lorne Surf Life Saving Club and the Bondi Surf Bathers’ Life Saving Club.

5. The Lorne Surf Life Saving Club hosts the nib Lorne Pier to Pub Swim and, as every Australian surf life saving club does, provides voluntary patrols of its coastline in summer so that swimmers and surfers can enjoy the ocean and surf safely.

6. The Bondi Surf Bathers’ Life Saving Club is the oldest surf lifesaving club in the world and hosts the Bondi To Bronte Ocean Swim whose video can be seen here and below. 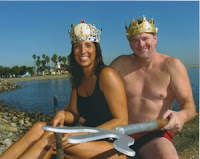 7. The Cabrillo Beach Polar Bears was started in 1953 by John Olguin and Jack Cheaney with the goals of health, physical fitness and community service.

The club has held formal and informal ocean training sessions, starting at 6:00 am and ending at dusk, near the Catalina Channel finish (on the California mainland) and a New Year's Day Swim for nearly 60 years.

The club annually selects a King and Queen of the Beach from its many daily ocean swimmers and has a convenient Cabrillo Beach Bathhouse as its official home only steps away from one of the coldest beaches in Southern California. The King and Queen represent the club at many community functions and are featured in the San Pedro Christmas Parade on the Polar Bear float. 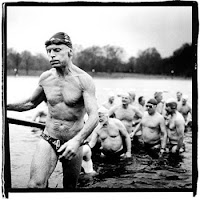 10. The Serpentine Swimming Club has own changing facilities and is allowed to swim in the Serpentine in Hyde Park in central London during certain morning hours. Its members swim year round and organizes the annual Peter Pan Cup Christmas Morning Swim.

The water temperature in the Serpentine ranges from 0°C (32°F) to 21°C (70°F). Even when the lake is frozen, the swimmers break a hole in the ice for some ice swimming.

11. The CIBBOWS (Coney Island Brighton Beach Open Water Swimmers) is a non-profit group dedicated to being a community resource for open water swimmers of all levels. Members conduct regular group swims at Brighton Beach and Coney Island in New York from April to November and host the Grimaldo's Mile, the Aquarium 5K and 1 Mile, and the Veteran's Day 5K, 1 Mile and 2 Mile Swims. 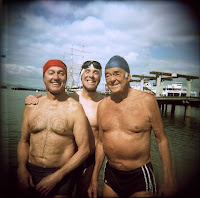 12. The Dolphin Swimming and Boating Club, established 1877, has rightly developed a proud tradition of safety, camaraderie and accomplishment over its long history. The iconic clubhouse is located near Fisherman's Wharf in full view of the majestic Golden Gate Bridge in San Francisco Bay.

Like the other clubs on this list, it has many members who have conquered most of the most difficult channels around the world.

Members swim year-round in the waters of Aquatic Park where the water temperatures ranges between 10°C (50°F) to 15°C (61°F) year-round. A line of buoys parallel to the shore marks a quarter-mile course. After six months' membership in good standing, members may participate in the Club's organized swim program: approximately 20 swims inside and outside the cove throughout the year. Highlights of the Dolphin Club program include the Golden Gate and Alcatraz swims, twilight swims followed by potluck barbecues, and the Fort Point to Aquatic Park swim. If members swim at least 40 miles between December 21st and March 21st, they are honored as an official Dolphin Club Polar Bear.

Its members, photographed above by Susanne Friedrich, are welcoming and warm to everyone who takes a cool dip in San Francisco Bay.

13. The Ocean City Swim Club is an independent open water swim club based in Ocean City, New Jersey that holds a number of ocean training sessions, including popular weekend swims.

14. Member of the New England Marathon Swimming Association have been swimming in the waters of New England for 30 years from Booth Bay to Narragansett Bay and host a swim in Gloucester Harbor. The Association was formed to ensure open water swimming opportunities in New England's rivers, ponds, lakes, harbors, bays, sounds or ocean are available now and in the future. 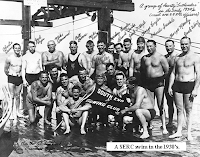 15. The South End Rowing Club, founded in 1873, has a club adjacent to the Dolphin Club, located near Fisherman's Wharf in full view of the majestic Golden Gate Bridge in San Francisco Bay. The club hosts the annual 1.25-mile Alcatraz Invitational Swim and a series of club swims, but its members train year-round in all conditions with only a swimsuit and a thermal cap. The camaraderie of the club is enticing and engaging. Like most clubs on this list, getting started is easy: just come down to the club and introduce yourself or help out at a club event. 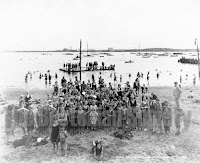 17. The L Street Brownies, officially organized as a club in 1902 with a history that has been traced to 1865, enjoys the L-Street Bathhouse as its headquarters. Members have been enjoying the cold waters of Boston Harbor for over 100 years and annually host the L Street New Year's Day Swim - a Boston tradition since 1904. Their club name comes from the beach where the club member meet and for the nut-brown skin color members develop from exposure to the sun.

Membership in the club costs US$1 and averages between 35-50 swimmers throughout the year.

18. The Cork Masters Swimming Club in Ireland hosts training sessions, the Lee River Swim and the The Edge Sports Sandycove Island Challenge jointly with the Cork Lions Club. Sandycove Island has become a popular training area for endurance athletes, channel swimmers and triathletes with an interest in open water swimming.

19. The Half Moon Swimming Club in Dublin, Ireland was founded in 1898 and has a history of success and enjoyment in the open water.

20. The Colorado Masters Swimming Association hosts open water swimming sessions at the Chatfield State Park in the Gravel Pond. There are also regular series swims in the middle of the Rocky Mountain at the Grant Ranch Swim Series and the Aquaman Series.

Besides promoting wellness and the enjoyment of open water swimming, Lucky has organized world record distance lake swims (solos), relays (up to 100K), 1K races and hosted thousands of swimmers and hundreds of lake swims at his daily swims in a well-marked 1K course.

23. The Waikiki Swim Club has held weekly swims throughout Oahu including Saturday morning swims at Ala Moana Beach Park and Sunday morning swims at Kaimana Beach (on the Diamond Head side of Waikiki Beach) since 1971 as Hawaii's oldest organized club devoted to promoting safe and fun ocean swimming.

It hosts a number of ocean swims every year and sent teams to the Maui Channel Swim every year since its inception. The club sponsors the North Shore Swim Series, the Christmas Biathlon, and the Valentine's Day Biathlon. Members include swimmers of a wide range of age and ability.

24. The private Olympic Club, America's oldest athletic club, was established in 1860 in San Francisco. Its 5,000+ active members are dedicated to the pursuit of amateur athletic excellence and include many Olympic heroes, accomplished athletes and world open water swimming champions. The Olympic Club hosts the popular Trans Tahoe Relay that is a high-altitude masters swimming relay from the state of Nevada to the state of California across Lake Tahoe.

25. Open Water Chicago exists to deliver adventures in fitness to both the local and global communities of open water swimming enthusiasts that centers its training swims in Lake Michigan on the shores of Chicago.

26. The Capo Masters is located San Juan Capistrano, California and has been meeting in Laguna Beach and other beach locations throughout Orange County and Los Angeles County for over twenty years.

Its regular ocean swimming groups have as many as 30 swimmers at one time and are led by ocean aficionado and ultra-marathon swimmer Scott Zornig (photo on left).

27. The Coney Island Polar Bear Club, established in 1903, is the oldest American winter bathing organization whose members swim in the Atlantic Ocean at Coney Island every Sunday from November to April. They have organized one of the most publicized Polar Bear Swims in the US for decades.

28. The Avila Dolphins Swim Tea practices every Sunday year-round in Avila Beach, centrally located between Los Angeles and San Francisco on the Californian coast. In the water by 11 am, the team sometimes splits into 2-3 groups to accommodate the varying levels of skill, expertise, enthusiasm and level of tolerance for the ocean conditions over the 1-2 mile course. The team members also travel to numerous races from Maui to San Francisco.

29. The Triathlon Club of San Diego has an ocean swim every Sunday at 8:00 am in Powerhouse Park in Del Mar, California. The Club is one of the oldest and largest triathlon clubs in the country with members primarily from San Diego and Southern Orange Counties, but also from Canada, Japan, and Australia. Members’ experience level ranges from first timer to professional.

There are hundreds of other open water swimming clubs around the world - these are just a select few. Enjoy their fellowship and camaraderie wherever you travel.