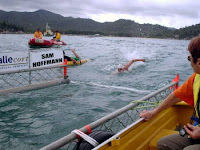 They swam to celebrate a Royal visit by the Queen.

The first swim across this treacherous channel, a nursery ground for tiger sharks and an area often strewn with stingers, was performed in 1924 by Douglas Pitt on Australia Day who, in order to protect himself from the numerous sea creatures in the area, swam inside a shark cage made of timber and wire that was towed by a boat. The second swim was done two years later, also on Australia day, in 1926 when Bert Gard crossed in rough seas that tossed him out of his shark cage three times during his 3 hour 23 minute swim.

But in 2007, the Townsville Open Water Swimming Association decided to make the Magnetic Island Swim cageless, enabling many more than the previous maximum of 11 solo swimmers to compete. 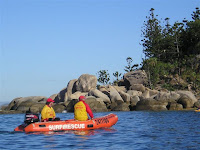 With perhaps the world’s most comprehensive and well-thought out safety plan, the race organization seems to have balanced safety requirements with popular demand.

We interviewed organizer John Barratt about this change and learned all kinds of fascinating facts:

Daily News of Open Water Swimmming: How did you manage the shark situation over the last two years? Did you change the safety plan as a result of the eliminating the shark cages? If so, how?

John Barrett: From the photographs, you can see how we went for the first time without the shark cages. At the start of the race where some swimmers are standing in the knee-deep water and shortly after the start when swimmers meet up with their accompanying paddler, you can see our new arrangements.

The cages that were used in the 1954 event were made of 44 gallon drums, wood and chicken wire. Better cages were built in later years but they still needed to be put into the water using a large crane and required boats that were capable of pulling a cage with a big drag factor. Trawlers were perfect, but not always available. In addition, a support dinghy was lashed to the side of each cage for the swimmer’s coach or handler and a official observer to ensure a fair swim.

In some years, with the wind at 25 knots, the cages, dinghy and the swimmer and people in the dinghy, got knocked around. The cages are only about 10 feet long, 5 feet wide and by 6 feet deep. The swimmers tried to swim at the front of the cage, but constantly got moved from side to side and towards the back of the cage through the actions of the wind and waves and surge of the tow rope.

There were plenty of cuts and bruised hands. Quite often, the lashings would come loose and the support dinghy came adrift. When we did the disclosure to our insurers, we noted that we were removing these dangerous elements associated with the cages!

We only had 11 cages and this factor meant that the swim would always be limited in participation. We could get more cages, but we would have difficulty in getting tow boats. Even with 11 cages and boats, things used to get messy with tow ropes around propellers, cages sinking just before the start of the race and tow ropes getting tangled between tow boats as swimmers tried to pass each other.

The decision to swim without cages was taken to encourage greater participation and remove these hassles. But, to swim without shark protection was still an issue. In fact, the course for the swim goes past shark 'drum lines' which are used to protect the beaches of Townsville and Magnetic Island.

The course is marked with large pink buoys and swimmers are required to stay within the course boundaries to avoid being swept northwards with the prevailing current. The plan to ensure swimmer safety is to have every swimmer accompanied by a paddler on a surf-ski, kayak or outrigger canoe.

In addition, we had a number of motor boats on the course. The paddler could assist the swimmer to keep on course, provide water or support if they have a cramp, etc., and could signal to one of the boats for attention in the event of an emergency. We have a sufficient number of boats to get all of the swimmers out of the water if required.

The swimmer has to meet up with their paddler by the time they reach a buoy about 500 meters off the beach. [Organizing] 50 swimmers and paddlers gets a bit messy but most seem to work it out. In 2009, we had the added support of the local surf lifesaving clubs. Their rigid inflatable boats (RIB’s) are very maneuverable and add extra noise in the water which deters any marine life (sharks) that may be any the area. Of course, we have first-aid at hand in the event of any problems. This year, we did have one swimmer who was removed from the water due to hypothermia. It wasn't particularly cold (21°C), but he didn't have the in-built insulation that some of us do.

Stingers are also prevalent in tropical waters during summer. They may occur later in the year which is one of the reasons that we have allowed the use of fast-skin and blueseventy style full swim suits. We are considering a category for wetsuits in 2010. So, that is what we did about the sharks and the fact that swimmers are out in the big blue without a black line to follow. Now, let me tell you about the crocodiles…

Daily News of Open Water Swimming: What is the response from the swimmers, parents, community and local media as a result of the elimination of the shark cages?

John Barrett: The local media were very quick to report that we were going to do a cage-less swim. Local fishermen, previous swim organizers and even a local politician were quoted about the dangers of sharks in the area. Each year, the government releases figures about the numbers of sharks caught in the region through the beach protection scheme. Fisherman have lots of tales to tell about sharks biting off the biggest fish they had ever caught just as they had got it to the boat.

We knew about the sharks and have put in place measures to minimize the risks. The newspaper did note that there were open water swims conducted all over the world with similar issues. Despite a bit of initial negativity, the local media have been very supportive of the event.

With the restriction on numbers lifted, many adult swimmers have jumped at the chance to do the swim. Chris Bell who did the swim in 1959 did it again in 2009. Younger swimmers are still a bit cautious, although the winner in 2008 was a 16-year-old lifesaver. In 2009, the second female home was a 15-year-old local girl who has since gone on to win open water events at the State level.

Daily News of Open Water Swimming: Do you foresee continued growth in your event?

John Barrett: The swim has been strongly supported over many years by Penny and Chris Palfrey. They have done the swim more times than anybody else. Having done swims like Rottnest Channel Swim, they were keen to see the swim grow and used their knowledge from other swims to make a major contribution in establishing procedures for the initial cage-less swim.

Chris was particularly keen to see the event grow to be as good and as big a draw card as Rottnest. We certainly want to keep improving the event and making it attractive to swimmers to put on their 'must do' list. At the moment, we have coped with the increase in numbers from 11 swimmers. If we get more swimmers, we will need more paddlers or a different safety arrangement. We are working with the local council to put in onto the events calendar.

During July 2010, this included everything from V8 motor racing, the Townsville Cup horse races and National Rugby League games to the Chamber Music Festival.

Daily News of Open Water Swimming: What happened to the old shark cages?

John Barrett: Each year after the swim we returned the cages to a holding area at the Port of Townsville. They are aluminum and occasionally needed repairs to the wire or the floatation. In 2006, one cage was almost wrecked when the bottom got caught on the coral reef off Picnic Bay.

The cages are still in storage with a few weeds growing through the wire. We have thought about sending one to the local museum and the rest to the local scrap metal dealer, but if there is anyone out there who thinks they have a better use then please get in touch. Rob Hutchings, who did the Magnetic Swim in 2008, has decided to go with a shark shield for his Great Barrier Reef Swim so he won't need one.

Daily News of Open Water Swimming: Can you explain the photograph (above)?

John Barrett: The race starts on Picnic Bay Beach on Magnetic Island and swimmers head towards the middle of the Strand Beach, Townsville. Because there is a coral reef just off Picnic Bay, we make the swimmers do a bit of a dog leg swim at the start. They go straight off the beach for about 400 meters and then take a right turn to head towards Castle Hill. That’s why the photo with Castle Hill in the background shows swimmers heading in what appears to in the wrong direction.

Now, about the crocodiles: There are major river systems to the north and south of Townsville and extensive areas of mangroves. In the last few years, there have been sightings of crocodiles off the Strand Beach as the crocodiles apparently migrate between the two river systems. This occurs during summer and not during winter when the swim is conducted.

As if the swimmers did not have enough to worry about!

The 57th Magnetic Island Swim was held cage-less in July with Bradley Moore as the overall victor. In response to concerns about swimmer safety, 11-year-old Jordan Hoffmann said, "I'm not worried about sharks. I do surf lifesaving all the time here (on The Strand)."