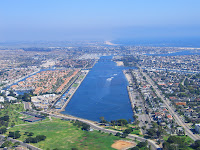 The 2010 USA Swimming National Open Water Swimming 5K and 10K Championships will be held in Long Beach, California on June 4th and 6th.

The picturesque Marine Stadium, site of the 1932 Olympic Rowing competition and the 1968 Olympic rowing trials, was recently designated as an official state historic site.

Athletes will compete five 2K loops in this qualification meet for the 2010 World Open Water Swimming Championships in Roberval, Canada.

Later in August, the same Marine Stadium will be the venue for the 10K race at the 2010 Pan Pacific Swimming Championships.