When Sara McLarty was seven years old, she confidentally told her parents that she wanted to be a professional triathlete.

After a career that took her to the University of Florida, the Olympic Trials and FOUR different world championships (in pool swimming, open water swimming, aquathlon and lifesaving), Sara finally made triathlon her life, career and profession.

The American pool swimming world may remember Sara as a 15-time All-American swimmer who placed fourth in the 400 freestyle at the 2004 USA Olympic Trials.

In the open water water, she was also among the world's elite, earning a bronze medal in the 5K at the 2004 World Open Water Swimming Championships.

But in the triathlon world, Sara is legendary.

She has never been beaten in the swim leg in any triathlon anywhere (on five different continents).

In addition to her athletic accomplishments, she has utilized her telecommunications honors degree from the University of Florida.

She has successfully branded herself among the elite triathlon echelon with multi-media exposure via monthly magazine columns, guest appearances, webinars, speeches, camps, clinics and podcasts.

After she qualified for her fifth different world championship in triathlon, we caught up with Sara as she was rushing off to another airport. 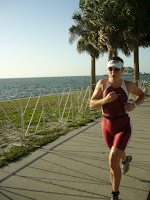 Q1. You just missed the Olympics as a pool swimmer and were one of the world’s best open water swimmers, but you chose to become a pro triathlete. Why?
A1. I started swimming competitively when I was four and did my first triathlon when I was seven. During my teenage years, triathlon became my favorite, my passion. But, following my parents advice, I remained a very competitive swimmer so that I could compete in college and hopefully get a scholarship. After just missing the Olympic team, I competed in open water events while transitioning to triathlons. It was just a bonus along the way that I posted some great results in open water.

Q2. What was your athletic background in biking and running?
A2. I trained and competed in triathlon since I was seven. I ran track and cross country in high school and won the Junior national road cycling championships in 2000.


Q3. How does one become a pro triathlete?
A3. You must first look at your priorities in life. Being a pro triathlete is not a lucrative or illustrious career. but, if you have the passion, dedication, and great support group behind you, it can be very fun. Other than that, one must train hard, in three sports…there’s not much else like it out there.

Q4. Have you experienced ups and downs as a pro triathlete?
A4. [laughter] What better example than that last two weekends of my career. First, I race amazing at St. Anthony’s and leading the entire race until the last ½ mile. I finished 3rd overall. It was great publicity and a [nice] payday. I had companies contacting me to build a partnership. Then I fly to Korea two days later and race like crap that weekend. I finished second to last. No money, embarrassing publicity, and not something I want to show in my results.

Q5. What is the hardest obstacle you have had to overcome as a pro triathlete?
A5. Injuries. Without a doubt, it is the hardest thing in this choice of career. Your body is your business. When it shuts down, you’re completely out of luck. Fortunately, if you remain determined and focused, you can figure out what’s wrong and get back in the game.

Q6. Is it a glamorous lifestyle?
A6. On those couple of days each year, when you perform 100%, all your training has been great, your nutrition was spot on, and it was just YOUR day to race fast, yes, it can be glamorous in the awards ceremony when everyone is congratulating you. Other than that, the other 360 days of the year are very far from the spotlight. It’s just you, the road, the pool, and a LOT of sweat.

Q7. Do you travel the world?
A7. That is one perk of this job. I’ve visited some amazing places and I make a point to stay a day or two after the event to take advantage of flying halfway around the world. I’ve seen some of Brazil, South Africa, Korea, China, Hungary and other places.

Q8. Where do you train?
A8. After finishing my collegiate career in Gainesville [at the University of Florida], I took advantage of the USA Triathlon Resident team program in Colorado Springs at the Olympic Training center. I lived and trained at altitude for three and a half years and then decided it was time to choose a place of my own. I was back in Florida in 2008 and did some training in Clermont, Florida. I really enjoyed the atmosphere and the training options, especially the National Training Center where I got a coaching job.

Q9. What is your daily schedule?
A9. I average about five hours of training per day. Most days, I do all three sports plus some strength, stretching, massage and naps. That leaves a few hours in the daylight to have fun with friends before starting all over the next day.

Q10. How much does it cost to be a pro triathlete? Your equipment must be expensive and your training and food bills must be enormous.
A10. Yep, it’s expensive. I was lucky to have the option of living at the Olympic Training Center for the early years of my career. The food, housing, training, facilities, sports medicine and coaching was all free. I was able to save my prize money during that time in preparation of getting my own place. Now, between coaching, substitute teaching, writing for sports publications, and racing for prize money, I am able to keep the roof over my head and food on the table.

Q11. What would you advise others who wish to become pro triathletes?
A11. Good luck and have fun. Triathletes are a great group of people and we welcome the competition.

Go Sara! We have been watching you for years! Bless you and congratulations on all of your success!