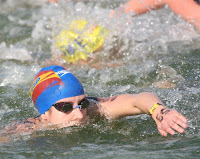 The world's best open water swimmers travel the world, fighting jet lag and each other, as they ply their trade at invitational swims (like the Great Swim), the FINA 10KM Marathon Swimming World Cup (where every event is 10 kilometers) and the FINA Open Water Swimming Grand Prix (where races range from 15K to 57K). They swim in warm water, cold water, rough water, flat water, tropical water, temperate water, all while battling the elements and each other.

As the season winds down, the world's best open water swimmers enjoy the pleasure of swimming...in a desert oasis. The swimmers are treated well, very well, in the United Arab Emirates. This Saturday, 82 swimmers will compete in the first of three season-ending races in Dubai at the FINA 10KM Marathon Swimming World Cup at Al Mamzar Beach. Al Hamriya Beach in Sharjah will host the site of the final leg of the FINA 10KM Marathon Swimming World Cup four days later and Dubai will host the 15K FINA Open Water Grand Prix final another four days later on October 25.

UAE Swimming Federation Executive Director Ayman Saad said, "Open water swimmers love to come to the UAE because they know they will be part of a great event. The World Cup for open water gave us a good chance of winning the bid to host the FINA short course swimming championships [to be held next November]. FINA trusts us."

Saad is quite the visionary - especially when you consider that the area did not have a regulation pool when he bid for the FINA pool championships. After being granted the rights to host a world championship, Sheikh Mohammed bin Rashid, Ruler of Dubai and Vice President of UAE, announced plans to build a 25-meter pool at three locations in addition to the Aquatic Centre which will have two 50-meter pools and a diving well - the first public swimming pools in Dubai.

Saad's motivation to help develop open water swimming is deeply personal. As a swimmer, he understood the hardships of international travel for the professionla marathon swimmers. "I remember [going to] Canada because it was such a long trip. When I first started organizing [professional open water swimming events] in Egypt 15 years ago I had one goal in mind: I wanted to make the swimmers happy and to make them feel special."

It appears that he has achieved his goal. Congratulations.

you wrote 82 swimmers are going to compete. Do you have a start list or something like this?