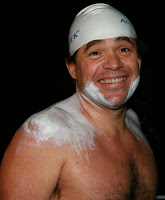 Antonio Argüelles (Toño) of Mexico because the first Mexican marathon swimmer and 34th person overall to complete the Triple Crown of Marathon Swimming.

Toño became the third person to Triple Crown in one season after he completed his English Channel swim in 12:54 on September 6th, his second crossing of the Channel after a 10-year hiatus. This swim was in addition to his June 5th Manhattan Island Marathon Swim and his July 13th Catalina Channel crossing.

As Toño says on his Triple Corona website, "We all have a channel to cross: for some, that is the English Channel; for others, it is 30 minutes of daily exercise; and for some, it is not to quit school."

"In April, I decided to celebrate my 50-year-old birthday with a quest of the Triple Crown in one season. I swam Manhattan in June, Catalina in July and the Channel in September."
Posted by Steven Munatones