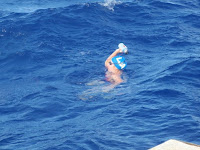 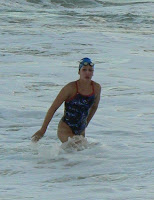 Daily News of Open Water Swimming: You started at 3 am. Were you afraid swimming at night in the middle of the Pacific Ocean?
Mackenzie: Not at all, it was very calming and the water temperature was perfectly warm. It was actually very relaxing.


Daily News of Open Water Swimming: Was it scary at all?
Mackenzie Miller: I had a fear I wouldn't be able to finish at Sandy's Beach and thought I would have had to swim even more to finish elsewhere...which would have been Makapu'u or Hanauma Bay. But I didn't have to and I was very happy when I finished. Something I really dreaded was swallowing a jellyfish. I know when a friend of our's swam Molokai in 2007, swallowed a box jellyfish and had to terminate her swim. Near the end when I was close to Sandy's, I started getting stung all over my body, about 5 times, including my face and I knew if i swallowed a jellyfish I most likely would not be able to finish the swim. I feared not finishing when I was already that close. 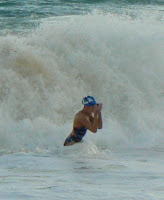 Daily News of Open Water Swimming: What did you feel like walking out of the water at Sandy's Beach?
Mackenzie Miller: After having to wait for three huge waves to pass before being able to walk out was not fun. But when I finally walked out, I couldn't believe it. I was in shock but SO HAPPY that I did it. I was also in shock with how many people were there to see me finish.

Daily News of Open Water Swimming: What was the hardest part of your swim?
Mackenzie Miller: When I only had three miles to go, the intersections of currents between Koko Head and Makapu'u kicked in hard. I felt like I wasn't moving anywhere. This was when the swim was entirely about my mental state. It literally takes over. My dad said at this point, "Mother Nature is going to test her."

Daily News of Open Water Swimming: How did you get over this part of the swim?
Mackenzie: I kept yelling at myself, "I gotta make this. I can see the beach, it's right there. So many people are here for you. You trained so hard you're not giving up now. You're so close." And I also kept praying and kept saying "Lord stay with me this is when I need you...help me get through this please..." and I did.

Daily News of Open Water Swimming: What did you eat and drink on the swim?
Mackenzie Miller: I was eating chocolate PowerBars, had an apple banana and Gatorade straight or watered down. When I got to my 12th hour, I was starving and my dad asked me, "Do you want Gatorade or PowerBar?" I asked, "Is there any grilled chicken sandwiches left?" He said, "Yup." I asked, "Can I please have that? I'm so hungry - I am sick of PowerBars and Gatorade" So he threw a grilled chicken sandwich to me. I got about half of it down with bread before the waves sogged the bread down. Then I just threw the bread in the ocean and downed the rest of that chicken. It tasted AMAZING.

Daily News of Open Water Swimming: Looking back, did you think you were adequately prepared for your swim?
Mackenzie Miller: Yes, I believed I was ready, physically and mentally.

Daily News of Open Water Swimming: Did you have a stand-up paddler?
Mackenzie Miller: No, I didn't, the conditions that I had would have been very hard for a stand-up paddler. Ian Emberson, who swam the Molokai Channel with my dad 30 years ago, actually paddled on a surfboard with me all night.

A post-swim interview with Miller can be seen here.