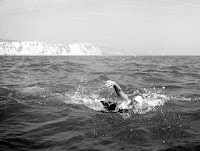 Earlier that same year, she had also conquered the Robben Island - Three Anchor Bay swim in South Africa, also in a record time.

In 1973 was the women’s world marathon swimming champion. In 1974, she was ranked third behind Americans Diana Nyad and Sandra Bucha and later moved to Dover, England with her husband Ray Dixon in 1974.

After hanging up her swimsuit, Corrie continued in the sport through coaching. They acted as swimming coaches to Dover Lifeguard Club before focusing on open water swimming, not only for Dover swimmers, but also those who came from far and wide to attempt the English Channel. She combined a rigorous pool swimming regimen with an admittedly tough open water training program that began as early as April in Dover, depending on the weather.

Coached by Corrie, swimmers from Dover produced a long and impressive list of results:

Outside of the English Channel, Corrie also left her mark. Throughout the 1980's, Corrie-coached Dover swimmers dominated British Long Distance Swimming Association events, setting records from Brighton to Loch Lomond as they formed the core of the British Long Distance Swimming Team. Corrie also coached two swimmers, Lyndon Dunsbee and Bridget Young, who were both inducted into the International Marathon Swimming Hall of Fame in 1988.

Corrie also had a hand in the development of the Queen of the Channel, Alison Streeter’s early career and other British swimmer including Justin Palfrey. She also was always available to scores of overseas swimmers who flocked to Dover seeking her expertise. With a critical eye and soft heart for swimmers who were not ready, she sometimes told them to come back another year when they were ready.

Corrie, setting high standards in the English Channel as an accomplished swimmer and successful coach, is certainly an open water swimming hero.

I am sure this article was written by Alexander Nice, am I correct please?

I do not know. Please confirm with Mr. Nice and we will credit him with this content.

I just came across this again recently.

Yes, Steve I wrote it (although it has been edited here). We corresponded on the 28/08/2009 by email when I sent you a word document with the text.