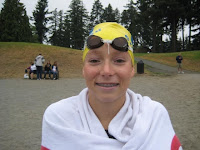 Jay Thomas gave us some first-hand observations of the races at the USA Swimming 5K Open Water Grand Prix meet this weekend in Seattle, Washington.

The course was in Angle Lake which is literally right outside the boundary of Seattle International airport.

The course included four loops in a rectangle course where the top men (Patrick Beasley of Tennessee Aquatics, Luca Spinazzola of Bluefish Swim Club and Vincent Donnelly of Brandon Sports) took turns at putting on mid-race surges. The pace varied widely from all out 300-meter sprints to a virtual standstill while the men sorted out who would lead the pack. The top 5 men stayed in a single pack sharing attacks and counter-attacks.

For a period, the men swam 5-wide, but they all know the value of entertainment: when the pack passed closely alongside a dock where coaches and spectators were cheering them on during each loop, they responded with high-paced swimming just meters off the pier. In the final 500 meters, Vincent put on a last spurt to win by two seconds over Julian Bonse of Irvine Novaquatics.

On the women's side, 2009 world championship 10K and 25K'er Eva Fabian, just back from Rome, won with Christine Jennings second in what was basically a two-person competition for first. 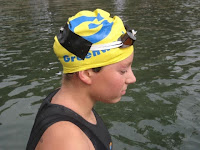 Eva (shown above) and Christine separated themselves from the pack after the first loop and continued to lengthen the distance as the race progressed.

Eva is shown with a homemade - and useful - countermeasure (i.e., tape) for preventing her goggles from being knocked off her head.

The top 3 finishers were as follows: