Summer In The Straits of Messina 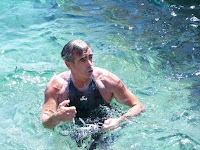 48-year-old Paolo Perrotti (shown on left) from Genoa won the 11th Trofeo Baia di Grotta in the Straits of Messina in Italy, battling both jellyfish and tough currents.

Paolo outswam (outfoxed?) his younger competitors by hugging the shoreline while the top swimmers took a different route.

A day after winning the Trofeo Baia di Grotta race, Paolo swam solo across the Straits, escorted by local expert Giovanni Arena, to set the all-time second-best time in 35:05. The all-time results since 1930 are shown here. 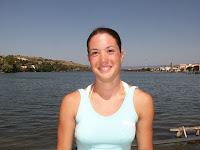 Later, 19-year-old Elena Lionello (shown on left) from Adria in northern Italy, did a double-crossing to set the women's record in 38:02 and the overall double-crossing record of 1:23:41.

Andrea Volpini (shown on left), a member of the Italian National Open Water Team who got 12th in the 25K at the 2009 World Swimming Championships won the 45th Traversata dello Stretto race, just touching out fellow national teammate Simone Ercoli.

With the exceptionally strong currents, Andrea won the 5.2K race in 40:28.

Earlier in the summer, the excitement of open water captured the attention of the younger swimmers in the area.

8-year-old Rosolino Cannio from Centuripe, Sicily, swam across the Straits of Messina in 58:13 to become the youngest swimmer to cross the Straits by 3 months (previously held by Agata Malvagna). 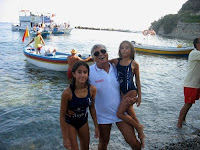